Insider tips for your time on Bruny

If you’re wondering where to go on Bruny, we’ve had a chat to some locals who have called the island home for many years. There’ve picked some of their favourite spots to share with you for an unforgettable time on Bruny.

Simon Allston enjoys life with his wife in the far north of Bruny Island, overlooking the Iron Pot. Here, they care for a small farm, growing much of their own food, surrounded by the wild beauty of this part of the island.

Walking Nebraska Beach – Nebraska is the big beach at Dennes Point, facing out onto North West Bay. We love walking here in the late afternoon, for the light is often extraordinary as the sun sets over the Snug Tiers, and we frequently have the beach to ourselves. There’s also some great rock hopping at the Bligh Point end that we enjoy.

Cape Queen Elizabeth Walk with side discoveries – Rather than going down past the well-photographed Mars Bluff Arch, head up over the bluff instead. Near the top of the ridge there’s a left turn that leads to the little-known ruins of Variety Bay Church, built in 1831. (Be sure to close the gate beside the church as this is the boundary of Murrayfield farm.)

Further along Mars Beach and up the dunes there is a right turn that heads out to Cape Queen Elizabeth, to the left is a 4WD track. Venture along here and look out for an indistinct track to your right, leading to a feature known as the Glue Pot that few know about – a fascinating sinkhole. Along here, the coastal forest is gorgeous.

Cycling on Bruny – There’s a great loop on North Bruny along Killora Road beginning and ending at the CWA Hall. It’s about 15 km long, and the views are amazing, especially on the Channel side. It’s not a difficult ride and there’s not a lot of traffic, but you do need to take care on the gravel. If you come on the ferry by bike, it’s also much cheaper than coming by car. Last I checked it cost $6.30. Coming from the ferry terminal, you can ride along Missionary Road, through Barnes Bay, rather than taking the main road, and this is also a really beautiful ride.

Sea kayaking – if you’re into kayaking there’s excellent waters for this around Bruny. We’re fortunate to have a double sea kayak, and before we lived on Bruny we would often paddle from Tinderbox to Dennes Point, which only takes 20 minutes or so. You can also quite easily paddle to Bruny from places like Coningham Beach, Trial Bay or  Middleton, but you need to be experienced and well equipped, and to take lots of care, because of other boat traffic and the possibility that the weather or water conditions may change whilst you are out there. We’ve also paddled along the eastern coast right down to Adventure Bay but this is very exposed, and so a major undertaking. You get a very different perspective of the island from the seat of a kayak.

Wendy and Mick Baillie host visitors at their Adventure Bay accommodation and love living in the south of Bruny.

The Bligh Museum – this a great little privately-run museum at Adventure Bay that often visitors drive straight by. It’s made with more than 20,000 hand-crafted bricks that were transported from the convict kiln on North Bruny and was built in 1954. For just $4 entry (adults), visitors can delve into stories of early exploration by the likes of Bligh, Cook and more. The private collection includes maps, artefacts, documents and fascinating insights into European’s early connections with Bruny Island.

Jen Creighton has lived on the island more than a decade and celebrates Bruny’s artisans and makers through her store Island Home Tasmania.

Get Shucked Oysters – why queue for oysters? Head to the Drive Thru window – yes – we’re not about French fries on Bruny but freshy shucked oysters delivered drive thru-style. Take your oysters across the road where you’ll see a little trail leading down to the beach. Enjoy oysters and bubbles on the white sands. There’s even a big driftwood log seat.

Adventure Bay – the name says it all. This area is all about adventure. Take the trail up to the top of Fluted Cape for epic views (allow about 2.5 hours) or head for Quiet Corner and discover the trails that weave across this headland. Do note that some hug the cliff edge, so be aware as you soak in the scenes.

Mabel Bay – most just go to the Mabel Bay Lookout (not far from the lighthouse) but just down to the left of the lookout is a secret track that weaves down to the bay itself. It’s quite steep and overgrown, so keep this in mind if you’re keen to attempt the 500-metre descent. The reward is next level amazing. Your own little paradise.

The Lighthouse – check out the historic lighthouse and take the path less travelled that leads down to the beach. You’ll find the track off to the left of the lighthouse buildings near the car park. Down there you’ll find a sign showing the original convict garden location and other hidden gems. 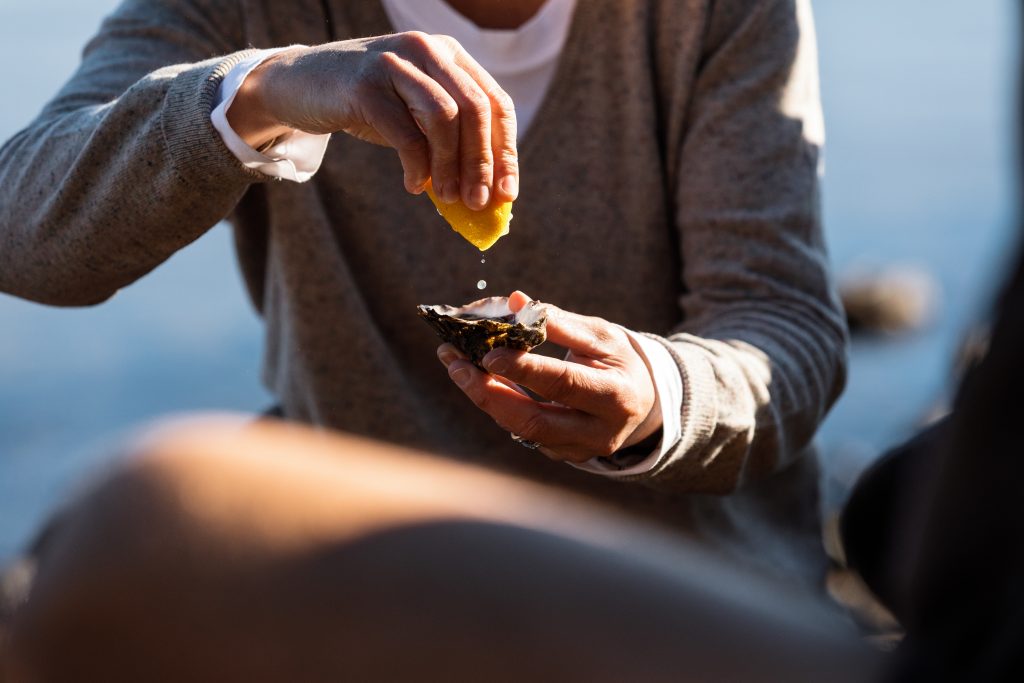 The Bruny Birds are Calling

Get Creative on Bruny

Find out more about what Bruny has to offer