The human history of Bruny Island dates back some 40,000 years – with much to learn from those who first walked this land.

Let’s start at the beginning. Up around Dennes Point at the northern end of Bruny Island there are Aboriginal shell middens that date back to around the time Bruny Island was formed. This is how far back the history of Bruny Island’s Nuenonne clan goes. This is a story of some 1500 generations.

“Here in Tasmania, on Bruny Island we can talk about one of the oldest living cultures in the world,” explains Rodney Dillon, a Palawa Elder of Tasmania. “Some of the ancestors lived through the ice age on Bruny. There is such a rich history here – right across our world it’s rare to have a story that dates back this far.” 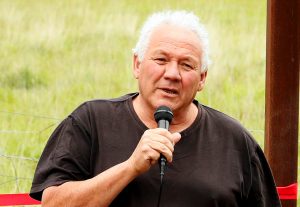 The Neck is the isthmus connecting the north and south of Bruny Island. Not only does it offer stunning views from the lookout, but insight into the life of Truganini. She was Mangana’s daughter, leader of the south-east tribe.

When she was young, Truganini lived a traditional Aboriginal life. That is, until Europeans arrived. She managed to survive the haunting 1820s when her people were almost entirely extinguished. Her harrowing story details the killing of her fiancé by timber-getters, her mother murdered by sailors, her sister taken by sealers and her uncle shot dead by a soldier. Hers is a story of utter horror and stoic determination.

“Truganini lived at Black Lake down near the airport,” explains Dillon. “Her father was a strong leader and she took charge after him. She led her people in war which was a huge feat – trying to keep them alive while her own family were being killed before her.”

You can read more about Truganini’s journey and her courageous life at the base of The Neck stairs.

Though not open to the public (aside from occasional events), Murrayfield is run by the Indigenous Land Corporation and is home to hundreds of significant Aboriginal sites. While valuing its cultural heritage, Murrayfield is a working farm with more than 10,000 merino sheep.

“We do run festivals at Murrayfield from time to time,” explains Dillon. “We had about 500 for a music festival where we celebrated through dance, fire and storytelling. It’s important we share our culture – both the difficult parts of the story and the good.”

Named after Truganini’s father, Mount Mangana is a great out-and-back walk just under 4 kilometres. Known for its mossy undergrowth, the summit offers good views on a clear day. At an elevation of 439m, it’s a fitting climb through rainforest to remember a courageous tribal leader. It takes around 1.5hours to complete.

“Our people probably went and got mutton fish (abalone) and perhaps some whelks (sea snails) at the cape. They might walk 20 minutes back to camp and have a cook up. Someone might make a shell necklace while men are out sourcing some bush tucker,” describes Dillon. “There’d be others teaching kids about how to cut tools at the rock quarry in Great Bay.”

“On any given day a clan might be burning a track – such as into Cloudy Bay as a food source. They had fresh water that comes out into Cloudy Bay and plenty of crayfish there. The middens were like museums for the people. They told clans what food was in the area as well as how much they could take. And they never took more.”

“Women had a big say in the day’s happenings. They were great divers and would head out catching scallops. By the evening they might gather round a fire to share stories and pass on culture to the young ones. That’s how it happened for thousands of years.”

The Bruny Birds are Calling

Find out why the Bruny birds are calling