Bruny Island has a deep history. Starting around 40,000 years ago our indigenous ancestors (the Nueonne) settled here. This was before Tasmania existed. The culture proudly continues as the oldest living culture in the world. When you come to Bruny, there are plenty of ways to connect with the indigenous history.

There is a difficult and dark past that isn’t easy to hear. In the early 19th century, the Nueonne and other Tasmanian tribes were mercilessly hunted, dispossessed and murdered. With the added impact of new diseases, their race and those of all other Tasmanian Aborigines were nearly destroyed. This terrible atrocity took place over a period of only 50 years.

Truganini is Bruny’s most famous person and her experience is also typical of what befell the Tasmanian Aborigines. Before she reached the age of 20, her mother had been killed by sailors, her sisters kidnapped by sealers and her uncle shot dead by a soldier. To many Europeans this was shocking, too. In 1895, HG Wells wrote War of the Worlds and Wells said his book was inspired by the question, “What would happen, if Martians did to Britain what the British had done to the Tasmanians?”

Aboriginal culture is still strongly represented on Bruny Island today. The famous Murrayfield Station on North Bruny is operated by the Weetapoona Aboriginal Corporation. There is also recognition of the indigenous history in the naming of the Truganini Lookout at the Neck. Mount Mangana (531m), Bruny’s highest point is named after her father.

The presence of Bruny’s Indigenous people runs deep – echoing in the winds, trees and oceans.

You’ll discover stories of custodianship, courage, tragedy and survival. As our guest, do hold them with respect. Today, the community remains strong. We’re a friendly bunch. Treat the island like we do and we’ll treat you like a mate. You’re now part of the community.

After travelling incredible distances through the Pacific and Southern Oceans, Bruny was often visited by the early explorers for shelter and revictualling. In 1642, the first European to visit was Abel Tasman. His maps were relied upon by Captain Cook and other explorers. Tasman of course gave his name to Tasmania.

In 1770 (as part of Cook’s first expedition) Furneaux anchored at Bruny and his ship’s name was given to Adventure Bay. Cook himself visited on his third and last expedition in 1777. Captain Bligh on his notorious ship the Bounty came to Adventure Bay in 1788 and 1792, where he planted Australia’s first apple trees. He would be chuffed that Tasmania would later be referred to as the Apple Isle! Drop into the Blight Museum at Adventure Bay to learn more.

NAMING OF BRUNY ISLAND AND SURROUNDS

In 1792, Bruni D’Entrecasteaux established that Bruny was an island. Both the island and the Channel were named after him. Interestingly, he was also searching for his countryman La Perouse, last seen by the First Fleet in Sydney in 1788. No trace has ever been found of La Perouse, his ships or their crews. D’Entrecateaux’s second in charge was Jean-Michel Huon, whose name was given to the Huon River. Other French names from this time continue to be used and reflect the history of Bruny and the Channel.

Despite the relative safety of Bruny Island after the wild ocean voyages, the coastline was still very treacherous. In 1838, what became Australia’s longest serving lighthouse, was built at Cape Bruny. With sweeping views over the Southern Ocean, the light at the top of the tower was 200m above sea level. Operations only stopped 158 years later in 1996. Head down to the lighthouse and be sure to pop into the nearby light station museum in South Bruny National Park. 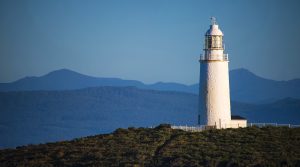 The island was gradually settled and farmlands established, particularly on North Bruny after the 1820s. The Dennes Point Heritage Trail provides a great introduction to the local geology, Aboriginal presence and early settlement. There was plenty of other activity, too. A whaling station was established at Adventure Bay and whales were also hunted in the Channel. The massive trees of Bruny (many near 100 metres high) were logged through the 19th and 20th centuries. Much of the timber was sent overseas to be used in building wharves. Some remnants of these operations can be seen at Sawdust Rd and around Adventure Bay if you look carefully.

Bruny was also a site for mining. At the end of the flat part of Cape Queen Elizabeth walk there is a lagoon which was once the site for oil drilling. It may be a surprising venture on Bruny, but was not the only example of mining. On the road into Adventure Bay there was coal mining activity near Coal Point (now more famous as an occasionally excellent surf break) and remnants of tin mines can still be seen.

The History Rooms at Alonnah are good place to learn more about the settler history of the island.

In more recent times the island was used for quarantine purposes, including German Prisoners of War from World War 1. A quarantine station was established on North Bruny. The site at Killora Road, North Bruny has restored some of the original buildings and provides information about the many people who were housed there. There is also insight into the response to pandemics from the 19th century.

An even more recent historical oddity is the breakwater at the Alonnah boat harbour. It was formed using the only surviving part of Hobart’s original pontoon road bridge which connected Hobart across the Derwent. That pontoon is now heritage listed.

You’re in for a treat. The flora and fauna on Bruny, in some cases, is like no other on the planet. And some birds choose to fly across oceans to…

Get Creative on Bruny